Our vision and mission

The world´s leading supplier of emission free heating focusing on electrode boilers, quality, innovative technical solutions and business models, taking on social responsibility and enabling everyone to make a difference.

A world with emission free heating.

The translation of Elpanneteknik is Electric Boiler Technology

Elpanneteknik is one of few world leading experts within the field of large Electric Boilers.

With an efficiency of almost 100%, Electric boilers from Elpanneteknik provide an economical, sustainable, silent, pollution free alternative or complement to traditional oil or gas fired boilers regardless of application.

Since the 1920’s, Sweden has remained the leading country within Electric Boilers in Europe.

The management of Elpanneteknik represent decades of experience from design, production, installations and customer support within this field. This knowledge has never been more needed than today in a world that focuses on green technology and sustainability.

High voltage boilers were originally invented in Sweden during the 1920´s as a natural development following the introduction of steam turbines and the AC network. At that time, high voltage boilers were developed for the same reasons that mean they are rapidly increasing in use today: for balancing the electrical grid – in Sweden at the time primarily hydropower – and for utilizing excess valley period electricity within the process industry. 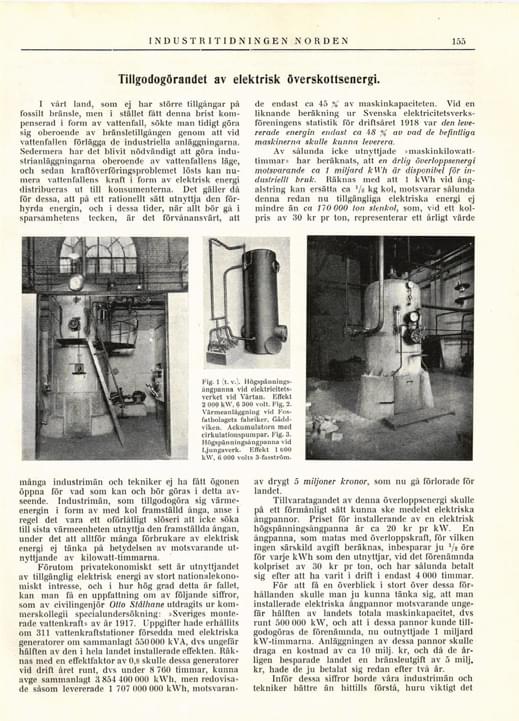 A BOOMING PERIOD FOR ELECTRICAL BOILERS IN SCANDINAVIA

The oil crisis of the mid 1970´s and the introduction of nuclear power led to an increased use of high voltage boilers during the 1980´s in Scandinavia. S-Man, a company started in 1954 and well-known for introducing thermal oil as a heating medium within Scandinavian marine markets at the end of the 1960´s, became one of the market leaders. The company was partially owned by the Björk family and focused on oil fired exhaust gas boilers, marine heating systems for cargo and bunker heating and industrial applications. High voltage hot water and steam boilers were increasingly used in hospitals, breweries, dairy production, laundries, paper mills and for district heating etc. Falling oil prices and the fact that Scandinavia connected its electrical grids with Europe led to declining sales by the mid-1980´s as market demands were temporarily fulfilled. The immersion type of high quality, high voltage steam boilers delivered by S-Man during the early 1980´s are still in service today. In 1987, Staffan and Mårten Björk became shareholders in S-Man. 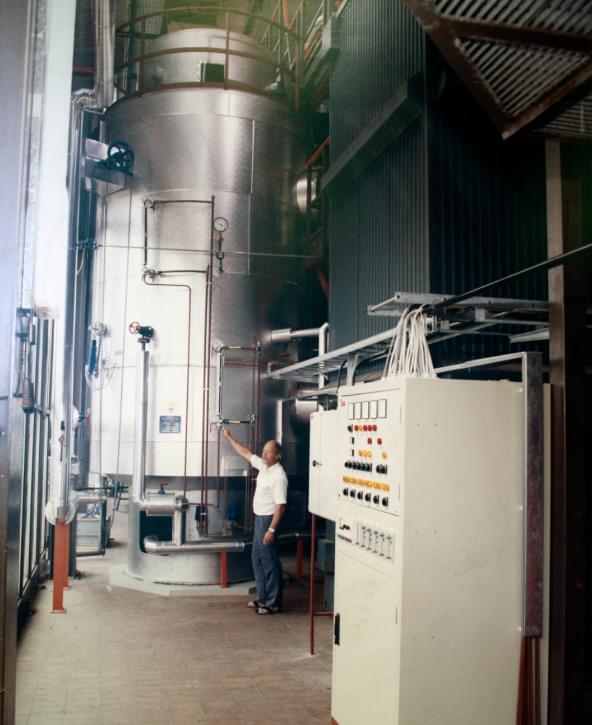 In 1993, Mr Leif Kring and Mr Lars Kring, who had previously worked for an electrical boiler company that was a competitor to S-Man, started the company Elpanneteknik. The company focused on the sale and maintenance of high and low voltage boilers and was awarded several important orders from the mining, manufacturing and pharmaceutical industries as well as from power plants. For example, Astra Zeneca placed an important order for a 25MW high voltage steam boiler for pharmaceutical use.

Meanwhile at S-Man, Mårten Björk replaced his father as CEO of the company in 1996. The company focused its efforts on international markets to make up for the downturn in Scandinavian shipbuilding. Staffan Björk, active in the company from 1988 until 1995, returned and subsequently took on the role of CFO.

S-Man developed from being a local supplier in Northern Europe to becoming a leading international company within its selected segments, continuing its sales and aftersales of heating systems based on electrical, oil fired and waste heat recovery boilers utilizing steam, hot water and thermal oil as heating media – especially for the marine segment. During the period 2001–2007, the company grew rapidly, increasing its order book 18 times in over 40 countries. As a result of China´s leading position within world shipbuilding, the Chinese market became one of the company’s most important. 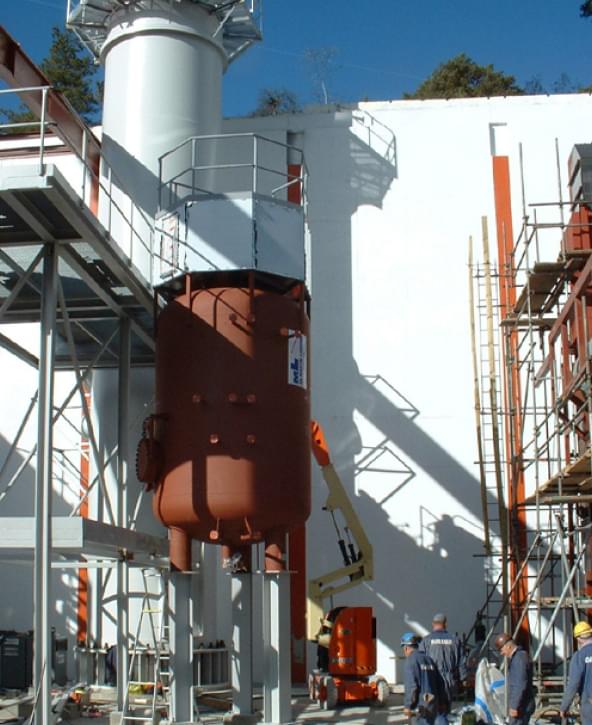 A PERIOD OF STRONG GROWTH

In 2006, Elpanneteknik was awarded an order for a 2 x 15MW start-up boiler system for the Olkiluotto 3 Nuclear Power plant in Finland. In 2007, the company initiated marketing of its products for the Chinese Nuclear Power Industry through a Chinese representative with three decades of experience in the Chinese boiler industry and energy sector, Mr. Yuan Rongmin.

Elpanneteknik implemented a revised quality system certified as per ISO9001:2008. The company was audited and approved by important customers such as Alstom and Siemens. For the marine and offshore industries, the company introduced low voltage boilers for gas carriers, and also performed important deliveries to the offshore industry.

S-Man started subsidiaries and liaison sales as well as aftersales offices in Brazil, Turkey, China and South Korea. During the period 2007–2010, S-Man was sold to an Italian boiler manufacturer and private equity fund.

In November 2009, during Sweden’s chairmanship of the European Union, the CEO of S-Man, Mårten Björk, participated as a delegate during the Sino-EU Business Summit in Nanjing, China. This coincided with the visit to China of the European Union Commission Chairman Mr Baroso, Swedish prime minister Mr Reinfeldt and Swedish foreign minister Mr Bildt. The meeting took place a few weeks prior to the environmental meeting in Copenhagen. The main theme of the event was to find ways of curbing the financial crisis through investments in Green Technology.

In search of alternative business, a search made necessary by the downturn of the marine market and based on his understanding of the potential impact by coal powered energy plants and district heating on the increasing air pollution in China, Mårten Björk decided to start marketing high voltage boilers in China, contacting Mr Leif Kring to discuss a potential co-operation. 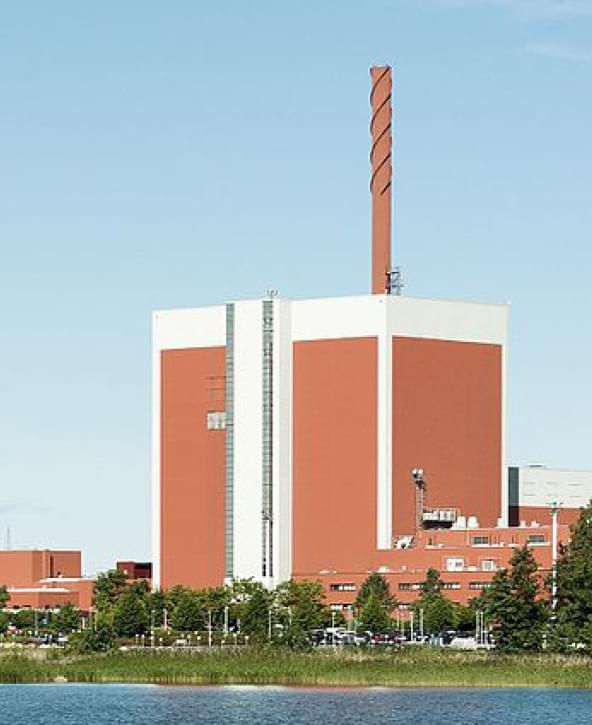 In December 2009, the S-Man and the Elpanneteknik teams decided to join forces. A new company, Elpanneteknik Sweden AB, was registered early in 2010.

A consortium with Elpanneteknik, S-Man and a Chinese entity belonging to Mr Yuan Rongmin was founded. To secure a strategically important order, Mårten Björk contacted the Swedish Ambassador to China after hearing that the Swedish King, his majesty Karl XVI Gustaf, was to visit Beijing in May 2010. He proposed that based on the bid winning notice, the contract with Sanmen Nuclear Power Co Ltd should be part of the signing ceremony during the visit. The strategy worked and as a result, this became Elpanneteknik Sweden AB’s first Chinese order.

Between 2010 and 2012, Elpanneteknik focused on developing sales within the nuclear power segment and introducing high voltage boilers for Chinese district heating in particular. In addition, the company also focused on utilizing the increase within renewable energy solutions – an increase in which high voltage boilers play a natural and important role.

In 2011, the nuclear market was halted by the Fukushima disaster. Due to overbuilding within the marine sector and as a result of the continuing slow development of world trade, marine market remained sluggish and management also predicted a downturn for offshore markets. As a result, Elpanneteknik increased its efforts in renewables and district heating.

Between 2013 and 2016, Elpanneteknik Sweden received important orders from the nuclear power segment and today, the company is one of only two established world leading suppliers of immersion type high voltage steam and hot water boilers for this segment. We can provide case references from China, Sweden, Finland, Russia and the United Kingdom.

In addition, Elpanneteknik Sweden has also established itself as one of the leading suppliers on the European market for renewables and grid balancing, supplying high voltage hot water boilers connected to wind power with the ability to reach full capacity from minimum load within 30 seconds.

The most important development for the company has taken place in the area of Chinese district heating, utilizing lower “valley period” electricity prices, night time accumulation and electrical grid balancing connected to renewables. In order to maintain the position as market leader on the Chinese market, part of the Swedish management team devotes the majority of their time working in China. This work involves close co-operation with local partners, investors etc. to develop sales and aftersales, localize non-core part of deliveries and organize financing.

In collaboration with its partners, the company was the first to introduce Build Own Operate Transfer (BOT) and Private Public Partnerships (PPP) modes with reference to electrical district heating. This also strengthened Elpanneteknik Sweden’s development as a supplier. Initially, this work was carried out at the risk of the brave Chinese and Swedish entrepreneurs involved, but later it was done in close co-operation with stock listed partners, leading local and central Chinese governmental financial institutions etc.

Delivered plants are up and running in several provinces. The most well-known is also one of the world’s biggest – a 130MW plant located on the edge of the Gobi / Taklamakan desert, in Gansu province. In early 2017, Elpanneteknik Sweden shipped the world’s biggest ever consignment of high voltage boilers, comprising 30 units.

In June 2017, Elpanneteknik Sweden AB received its biggest ever order for grid balancing, a 400 MW high voltage hot water plant for grid balancing in Northern China. For this order, the boilers were produced and shipped within an impressive 4 months from the date of the received order. 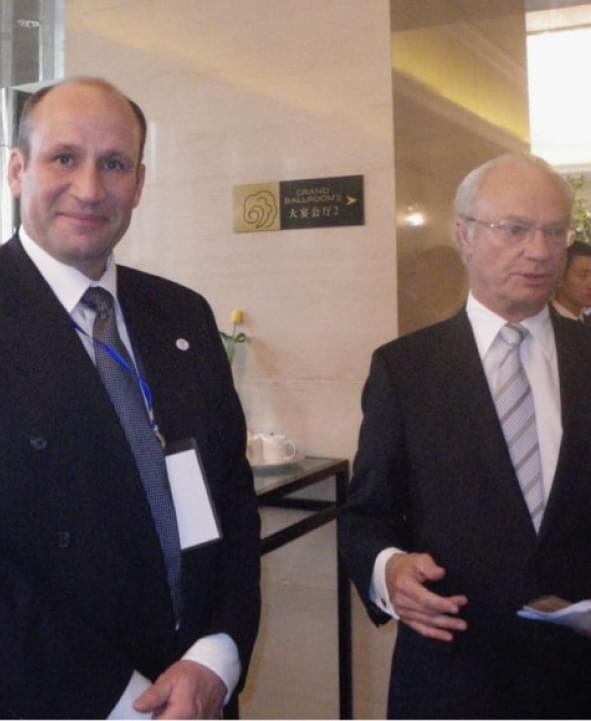 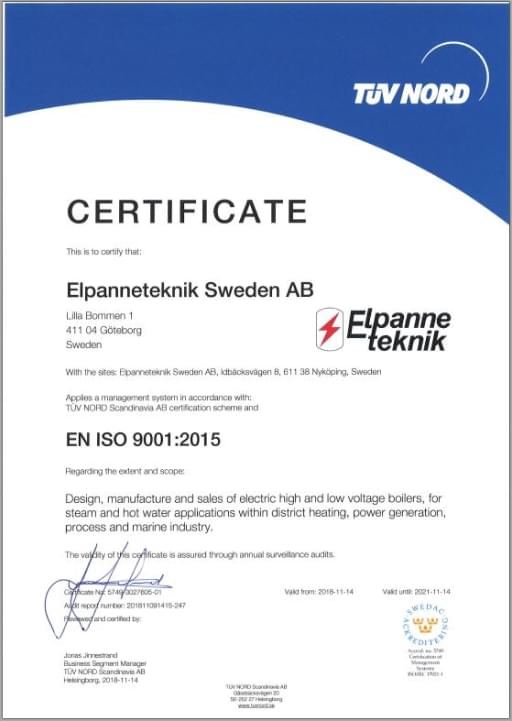 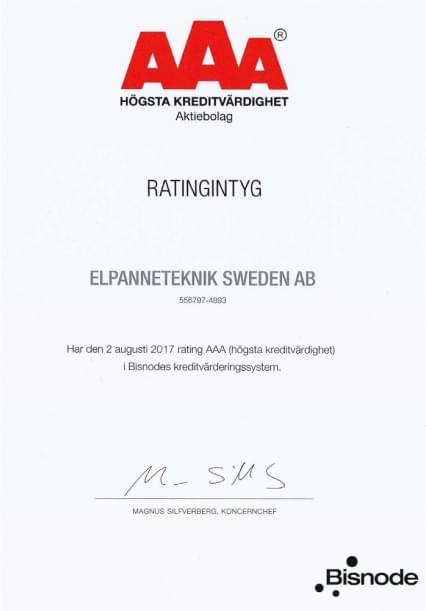 Our quality system is ISO 9001 certified. ASME and all other leading approvals necessary are in place.

An electrical boiler from Elpanneteknik is characterized by the market’s highest efficiency, high reliability, low investment cost, low installation cost, and the lowest possible maintenance costs. Electrical boilers delivered 35 years ago are still in operation and provide low maintenance costs for the end user. Service requirements are normally limited to a yearly inspection, and changing electrodes is done inside the boiler with access through a manhole on the side.

Elpanneteknik’s high voltage boilers do not have foaming or arcing issues due to their design and feedwater quality requirements. All sensitive components not produced by the company are provided by leading European brands.

Elpanneteknik provide a worldwide network for aftersales and installation as well as access to long-term maintenance agreements.

Elpanneteknik Sweden AB is committed to an operating philosophy based on openness in communication, integrity in serving our customers, fairness and concern for our employees and our responsibility to the communities within which we operate or may affect.

Our vision is to exceed customer expectations for quality, safety, sustainability, cost, delivery and value. Additionally, we are dedicated to creating a profitable business culture that is based on principles which are outlined in our quality system policy.

Your privacy is important to us and we are responsible for the personal information you provide us with. This policy describes how we process, store and manage your personal data both when you are a customer with us and partly when you apply for a job with us.

It also describes your rights and how you can enforce them. It is important that you read and understand the privacy policy and feel secure in our processing of your personal data.

We are happy to answer any questions. Please leave your contacts and we’ll get back to you soon.